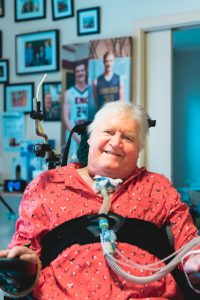 Gerard Stevenson won the Dun & Bradstreet National Sales Competition in his first year with the company. With a successful career in business, he and his wife started a company selling interactive technology to schools. Each year, the national distributor ran a sales competition- an all-expenses-paid trip to an international conference. Gerard’s company won the competition each year so he has traveled extensively throughout the USA, Germany, and the UK. He was also a member of the Australian Speakers Association and worked in corporate training.

During this time, he researched, wrote, crafted, and then recrafted 90 stories about people who faced enormous challenges and found ways to be victorious. Little did he know that he was really going to need those stories a few years later.

On August 24th, 2014, Gerard lost his footing on the bottom rung of a ladder and fell from the deck at his home. In the blink of an eye, his and his family’s life changed forever. The impact was massive. His eyes had rolled back into his head. He had no pulse. His heart had stopped and he wasn’t breathing. He was gone. Or so it seemed.

Deeply embedded in his subconscious were the 90 people he had written about in his books. People who refused to be dominated by adverse circumstances. People like Christopher Columbus, Charlie Chaplin, Marie Curie, Edward Jenner. Although unconscious, he was still able to draw on their courage and determination and survive.

In ICU, Gerard was told his injuries were so bad that he could have his life support turned off.  His fall had broken his neck at the very base of his skull. His spinal cord had been crushed and he would live his life, if he continued, as a ventilator-dependent quadriplegic. Rather than accept the easy way out and die, Gerard chose to live an engaged and productive life in a wheelchair driven by his breath.  He has no movement or feeling from the neck down. But he can eat, drink and speak!

Using his voice, Gerard continues to write and rewrite the stories of people who survived and excelled in challenging circumstances. His blog, www.standontheshoudersofgiants.com.au shares insights into these amazing people and also into Gerard’s inspiring “against all odds” attitude.

Gerard’s inspiring attitude has seen him involved in advocating for people with disabilities, is on the steering committee for the facility he resides in and as a member of the Australian Ventilator Users network. Gerard sees himself as “re-enabled,” not disabled. He is the master at adapting to change and can share insights with individuals and companies on how to do the same. He is an inspiring speaker who lives and shares the philosophy that you can do anything f you want to do it enough.