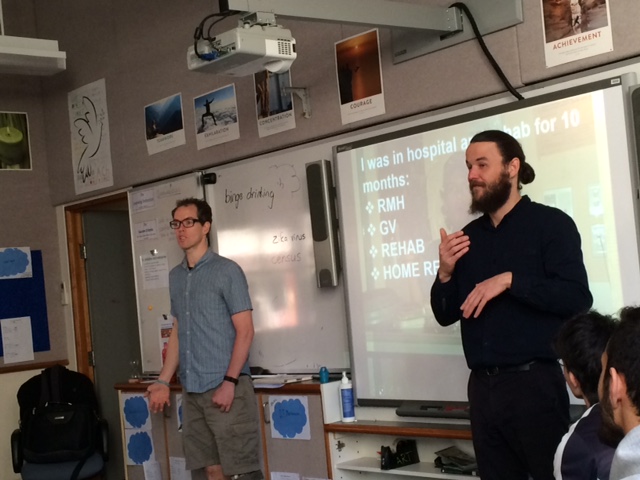 Brent delivers his presentation on powerpoint, video and this time with an interpreter (in photo is Tyson)

It was fascinating to witness Brent deliver his presentation to students. He “gets” them involved. His insertion of Q and A and then linking it to the main text of his PowerPoint presentation is enough to keep the listeners tuned in– and then they “get it” in return. Brent also used live demonstration to emphasize some key points in his talk, as well as the use of video to compare where he was before during his difficult time in rehab to where he is right now in terms of his personal goals and plans.

The other interesting aspect to this presentation was that the students are from the Victorian College for the Deaf. Due to privacy reasons we were unable to take photos of the students who were really switched on during the talk. However we were able to capture a snap of Brent and Tyson who was with him all the time to help interpret for the students using sign language and to help the students ask questions in return. One would think the session would be a bit too quiet but it was certainly not the case at all. The presentation was dynamic and you would not even think that these smart kids couldn’t speak. Their hand movements were fast and furious, meaning they were very eager to interact, and there was not a dull moment during the Q and A.

Brent’s topic about life choices was very relatable, including the aspect on binge drinking. These kids certainly made the most of Brent’s visit. And for Speakers Bank, we also learned how to “clap” using sign language. It was a great session, if we may say so. Well done Brent and students of the Victorian College for the Deaf.