Oh what a night of fun! Seddon Community Bank organised a Community Pitch Event held at the Yarraville Club on 21 April 2015, bringing together 18 charities that went through a rigorous process to pitch for their projects and talk about their community groups. Speakers Bank was lucky to be one of those given only exactly 3 minutes to present. Under time pressure, Project Officer Mimi Laurilla together with one of Speakers Bank’s speakers Kathyn Beaton and her guide dog Zeke, impressed the audience with a mini-comedy skit at the beginning of the presentation which highlights disability within Kathryn’s context as a person with vision impairment, then segued to discussing Speakers Bank’s expertise on story-telling, advocacy, social inclusion and breaking down barriers for people with disability.

The project calls for support to Speakers Bank’s plan to complement the current face to face speaking engagements by developing further its online presence. The projects aims to enable Speakers Bank to reach out to more people using social media tools such as Facebook, Twitter, Instagram, and utilising blogging and Youtube as some of its channels as well. Speakers Bank is asking for equipment to make this happen.

There were several means to raise funds during the evening. The main community partners or sponsors of the event composed of local businesses each gave $500 to the group of their choice. On top of this, other local businesses and interested members of the community that came to support purchased as many $50 vouchers they wished which they then gave to their favourite charities. There was also a matter of voting. Each participant received a piggy bank. All attendees of the night were given a voting chip that will be put on the piggy bank of the group they believe deserves extra cash donation from Seddon Community Bank. The bank was giving this away as part of their 6th anniversary. The more votes the more chances of winning!

When one asks, one receives. Thanks to Pekish@Yarraville, Rotary Club of Yarraville, Trade Creative, Jas Stephens, Alpha Bakehouse, and the Seddon Community Bank, Speakers Bank was able to raise $450 dollars towards purchase of equipment, and best of all, it now has an I-Pad courtesy of the Yarraville Club! 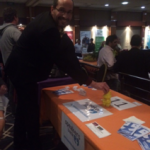 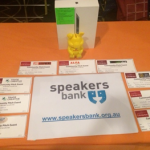 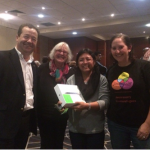